THANK YOU TO OUR 2020 SPONSORS 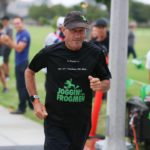 I received a call on Saturday, August 6th, 2011, that will forever change my life.  It said that my dear friend, Jon Thomas Tumilson, U.S. Navy SEAL (JT, to most, if not all of his friends), had been killed in the helicopter shot down which we all now know included the deaths of 31 brave American heroes (30 soldiers, 1 service dog).  They were on a mission, Extortion 17, in Afghanistan. These 31 warriors gave the ultimate sacrifice for our country and for freedom.  I will never forget.  We can never forget.  It is with that idea in mind, that I wanted to add another race to the Joggin’ for Frogmen 5K Series here in my city, Frisco, Texas. I was fortunate to have been a part of creating the first Joggin’ for Frogmen race in July, 2012, memorializing the first anniversary of the incident. It has carried on for 8 more years, has extended to 9 cities across the country, and now we are ready in Texas to honor those American Heroes. I’d encourage you to be a part of running the race virtually on November 7th and assist us in our quest to pay homage to these lives, and their surviving families!!

There will not be an in-person Frisco race this year due to the evolving COVID-19 virus. All registered and new participants will be considered Virtual and packets will be mailed to your address on record. See our FAQ’sor email us at FriscoTX@JogginForFrogmen.com with any questions!

Join Our Team and Fundraise

1. Register for the 5k race in Frisco.
2. Click YES during your race registration and your fundraising page will automatically be created for you!
3. Get cool stuff by raising the following:
$100 – receive a shirt and medal
4. Win Prizes
– Top individual fundraiser gets a prize on race day

1. Run (or do anything you want, like a bake sale or silent auction!) anywhere in the world to support the Navy SEAL Foundation
2. Click HERE to create a fundraising page for yourself or your team to support the 2020 Frisco race.
3. Get cool stuff by raising the following:
$100 – receive a shirt and medal
4. Win Prizes

Email FriscoTX@JogginforFrogmen.com with any questions!

All Participants will receive

5k: All 5k finishers will receive a JFF medal (which is also a bottle opener), a custom JFF mask and a race t-shirt that will be mailed to you address on record.

Tadpole Trot: All kids who register and complete the Tadpole Trot will receive a JFF t-shirt and a Tadpole Trot finisher medal mailed to them.

There will be no awards for the 2020 Virtual Race!  Have fun out there and make sure to send us your pictures for our Facebook album!!

Joggin’ for Frogmen is proud to partner with GORUCK for the 2020 Race Season!

Ruckers will receive the 5k shirt, medal and a custom GORUCK Finisher patch

Joggin' for Frogmen's number one priority is the health and safety of its participants, volunteers and staff. Like all of you, we're monitoring the COVID-19 virus very closely. For each of our races, we will be following CDC, state and local guidelines and directives and should any race details change due to the coronavirus outbreak we will notify registered participants and update our website and Facebook immediately.